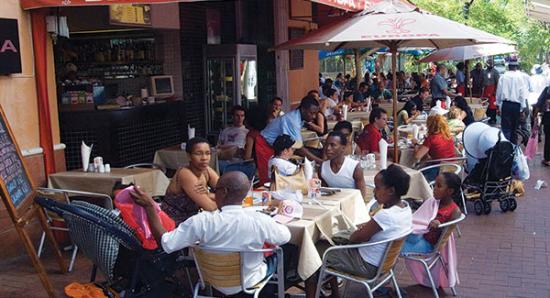 Mariam Koné left Canada five years ago to start a business consulting firm in Bamako, the capital of Mali. As her client base grew steadily, earnings from her company, Koné Conseil, also increased. Business has been great, she says. Although her previous job as an industrial engineer at a consulting firm in Montreal, Canada, was stable and the pay was good, Ms Koné wanted a new challenge in her home country. Her return to Mali was risky and audacious, but it has paid off. “I used to work for others, but now I am working for myself and also hiring people,” she says. “And I have no regrets.”

Ms. Koné is one of many young and skilled African immigrants who have gone or are going back to their homelands, mainly from North America and Western Europe. If the 1980s and 1990s were characterized by the brain drain phenomenon—when skilled Africans went abroad in search of greener pastures—these days they are going back home. The new term is “reverse migration,” or “reverse brain drain,” explains Elizabeth Chacko in an article, “From Brain Drain to Brain Gain.”* It happens when professionals return to “their home country to take advantage of new growth and employment opportunities.”

The International Organization for Migration (IOM), an intergovernmental body that provides services and advice to migrants and governments, acknowledges the trend. Tauhid Pasha, an IOM senior specialist on migration and human development based in London, told Africa Renewal in an interview that his organization has helped 150 doctors and nurses return to different countries in Africa. These professionals have in turn trained more than 15,000 local health workers under IOM’s Migration for Development in Africa programme, which started in 2001.

According to Mr. Pasha, post-conflict countries like Somalia have been the biggest beneficiaries of IOM’s diaspora return programmes. “With their skills, they are being placed in government to restructure the civil service and even enter into high levels of government,” he said.

In addition, IOM has assisted about 2,000 skilled people from 41 African countries in returning to their homelands under its Return and Reintegration of Qualified African Nationals (RQAN) programme, which began in 1983. While IOM’s repatriation programmes have served only a small fraction of the African migrants living in the West, an increasing number of Africans are finding their way back home without official assistance.

The tide is slowly turning

Analysts believe that most of those returning to Africa do not get into the IOM’s repatriation programmes, and Mr. Pasha acknowledged that figures on those returning on their own are difficult to quantify. However, with Africa’s rising economy and decreasing conflicts, African immigrants have found incentives. A 2010 IOM report found that about 70% of East African migrants, mainly Ugandans, Kenyans and Tanzanians in the United Kingdom, were willing to return home permanently.

A survey by Jacana Partners, a pan-African private equity firm, of African students at the top 10 American and European business schools, showed similar results, that more than three in four hope to work in Africa upon graduation.

Many South African professionals who emigrated because of rising crime rates, bad labour policies and employment practices that favoured particular groups in a post-apartheid South Africa have now started returning. Kom Huis Toe-veldtog (Come Home Campaign), an organization that assists skilled South Africans in returning home, says it has so far helped about 6,000 people. “Life abroad is not necessarily moonshine and roses. People who leave the country, unfortunately, often only realise this when they have already paid the huge emotional and financial price attached to emigration,” the organization writes on its website.

The continent’s political leaders also appear to have arms open to receive the returning Africans. The New Partnership for Africa’s Development (NEPAD), the African Union’s economic development organ, even created an African diaspora programme that it says is strategically important to Africa. In May of last year, NEPAD organized an African Diaspora Summit in Johannesburg, South Africa, to encourage Africans in the diaspora to support economic integration and development on the continent. That was a thinly veiled invitation to skilled Africans abroad to return to help their countries.

Apart from the improving African economy and the decrease in civil conflicts, the going-back-home phenomenon appears to be driven, at least in part, by family reasons. “To migrate or not to migrate remains an intimately personal decision,” writes Chofamba Innocent Sithole, a Zimbabwean journalist and political analyst who lives in the U.K. For Michael Asiimwe, a Tanzanian and global service manager for Vodacom, a mobile phone company in Kenya, a yearning to be with his family forced him to return. He had spent six years in the U.K. and the US before moving back to Tanzania.

“It became too much for me to take,” Mr. Asiimwe told Africa Renewal. “So many big occasions were missed, weddings, funerals, birthdays of family members, just because it was too far and too expensive to travel back and forth.”

Tough working conditions abroad also force Africans to consider going back home. Ms. Koné now works only six hours a day, down from the 11 hours she used to work in Canada. “In the West, you work a lot and life is highly material. It’s all about buying material stuff,” she says, adding that in Mali she has struck a better balance between work and leisure.

It’s not all rosy

Entrepreneurs like Ms. Koné may feel welcomed back, but those who hope to get into public service are confronted by the harsh realities on the ground. Government salaries can be a fraction of what they used to make abroad, and working conditions can be poor. Many face drastic changes in their lifestyles: constant power outages, bad roads, poor health care systems, lack of safe drinking water, corruption, crime and the high cost of doing business.

Ms. Koné told Africa Renewal that it took about five years to get her business to its current level. The bureaucracy in Mali makes it difficult to make quick decisions, she says. “I wasn’t used to this in Canada.” Those who return are often equipped with innovative ideas but soon discover that they have to deal with the daily challenges of doing business in a harsh environment.

Despite such daunting challenges, many of those who have made the journey back home feel they made the right decision. “Those who are on the ground now will snatch the best opportunities first,” says Ms. Koné. “I cannot predict the future of Mali, I am still here and I have invested so much already.” Not even the current conflict in her country has weakened her resolve to continue business there.

Across Africa, from Mali to Tanzania, from Senegal and Somalia to South Africa, the story is the same: Africans are coming home from abroad—for patriotic or family reasons, or simply because of the continent’s increasing opportunities.

Brendah Nyakudya, editor of The Afropolitan, a South African magazine, says, “These young lions returning have been dubbed the ‘repatriation generation’ and are a fast-growing subculture of African émigrés.” Their return is now Africa’s gain after the earlier pains of brain drain.